We drove round the Eyre Peninsula and stopped in all of the beautiful bays and fishing ports along the way, taking in the amazing coastal scenery

Nice views of the ocean from the lookout at Whyalla

Watching the pelicans at Arno Bay

Stopping for a picture of the jetty at Tumby Bay

Stopping for the night in Coffin Bay

Watching the oyster boats at work the following morning

Crossing the dunes at Sheringa Beach

Going for a stroll along the quiet beach

Time to relax in the sun at Elliston Beach

Strange sculptures on the clifftops

View from the jetty

Visit to Murphy’s Haystacks, rock formations said to be over 1500 million years old!

Around the third week in April 2014 we were in close proximity to the Flinders Ranges, passing through the industrial town of Port Pirie and also Port Augusta – known as the crossroads of Australia, where major roads from the north, south, east and west all intersect.

We enjoyed a day sightseeing in the state’s cultured capital

Cycling past the National War Memorial

Outside the South Australian Museum

The banks of the Murray River

After crossing the border, we continued through Mt Gambier, Tantanoola, Beachport, Kingston SE and Meningie – a region known as the Limestone Coast

Looking down into the cave garden at Mount Gambier

First overnight stop in Tantanoola, next to the old railway station

Continuing up the coast, through Beachport

We travelled the Great Ocean Road in April 2014, one of the world’s most scenic drives! The unforgettable journey stretched over 240 km along the south eastern coast, and took us 3 days.

Sitting in the sun after a swim

We took the 86 steps down to Gibsons Beach!

Almost at the end of the coastal drive, ,we stopped for lunch in Warrnambool

We passed through Geelong, gateway to the Great Ocean Road. and stopped to explore the lovely beach

Walking down by the Yarra River

“Cow up a Tree” sculpture near Docklands

We paid a visit to Pin Oak court in the Melbourne suburb of Vermont South, excited to be seeing the set of Ramsay Street where Neighbours is filmed!

We took a small detour on the way to Melbourne, and visited Phillip Island – just in time to watch the sun set on Flynn’s Beach. 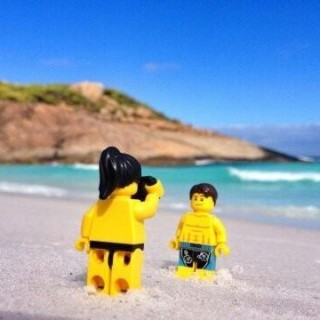